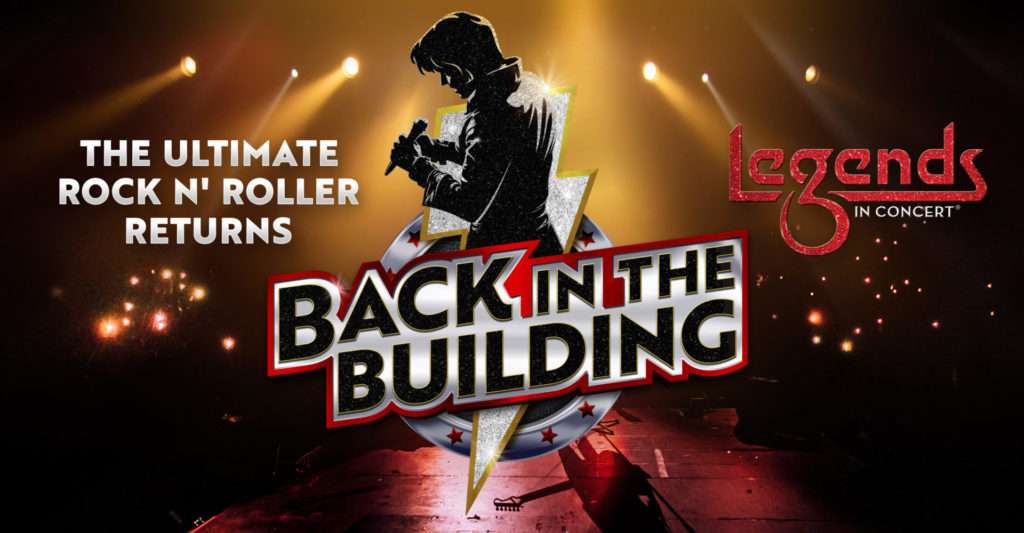 MYRTLE BEACH, SOUTH CAROLINA (12/15/2022) – Legends in Concert is ready to kick off the 2023 season with jumpsuits, black leather, swiveling hips and leg-shaking, presenting a first-ever Elvis themed production, Back in the Building, at the Legends in Concert Theater. The all-new show highlights the music of Elvis Presley as seen through the eyes of super-fans that became renowned tribute artists. The show will feature not only several of the world’s greatest tribute artists, but a live band, magnificent costumes, and much more.

Fans will celebrate extraordinary Elvis hits performed by Ultimate Elvis Tribute Artist Contest champions, as named by Elvis Presley Enterprises, including 2014 champion Jay Dupuis, and 2019 champion Taylor Rodriguez.  Those winners will be joined by a third Elvis, Daniel Durston, an Equity Actor-Musician who starred in the Broadway national tour of Million Dollar Quartet, and the national tour of Memphis the Musical.  Carol Maccri Gossamer will also be featured in the Elvis movie years, performing her legendary tribute to Ann-Margret.

“We are thrilled to present this group of super-talented Elvis Presley tribute artists this winter in Myrtle Beach,” said Brian Brigner, Chief Operating Officer of Legends in Concert. “This first-ever production comes on the heels of the successful summer Elvis movie release and a two month hugely-successful run of the show in Las Vegas, at the Tropicana Las Vegas.”

Legends in Concert is celebrating 39 years of success and claims the title of longest-running show in Las Vegas.  Owned and operated by On Stage Enterprises, Legends in Concert debuted in 1983 and has continued to mesmerize fans for close to four decades on the Las Vegas Strip.  Currently, the all-new production holds six performances weekly in the Legends in Concert Theater at Tropicana Las Vegas. Packed with all-star talent and powerhouse vocals from some of the world’s top tribute artists, the legendary show entertains audiences of all ages. The tribute artists perform using their own natural voices and are backed by a live band that rocks the house with vivacious back-up singers, dancers and sensational showgirls who bring the performances to life. In addition to Las Vegas, On Stage produces Legends in Concert productions in such markets as Atlantic City, Branson, Foxwoods Resort Casino, Long Island, Myrtle Beach, Niagara Falls, in Waikiki at the Royal Hawaiian Theater, Melbourne, Australia, and on the high seas aboard the Norwegian PEARL. MELBOURNE WILL AGAIN EXPERIENCE THE THRILL OF LEGENDS IN CONCERT

Legends in Concert made its Las Vegas debut in 1983 as an initial six-week engagement in the centre of the Las Vegas Strip. Continuously running since then, it is the longest-running live entertainment in Las Vegas’ history with its flagship show. Legends in Concert has entertained over 40 million fans during the past 39 years.

Legends in Concert has resumed engagements and is back on the road, since Covid restrictions have been scaled back, travelling around the world with performances in many different theatres and casino showrooms. In Melbourne, the tribute artists performing at The Palms at Crown showroom will cross a dynamic spectrum of music.

“Legends is thrilled to be returning to The Palms, one of the best concert venues anywhere and which also has had some of the most energetic and appreciative Legends fans the show has held performances for,” said Mark Kogan, General Manager for Special Engagements of Legends in Concert. This will be our fifth seasonal engagement in Melbourne. This coming summer’s show will feature a “magnificent seven” all-star line-up of the best of the best tribute artists in the world who have been fan favourites of our past four engagements at The Palms. And Elvis will be “back in the building” at The Palms, which will give fans of the King and the Baz Luhrmann’s Elvis movie the ultimate feel-good experience.” The tribute artists perform using only their own natural voices and are backed by a live band that rocks the house with vivacious back-up singers and dancers. All were carefully selected to help ensure Legends in Concert’s return to

Legends in Concert – The Palms at Crown Melbourne
Dates: January 12 to 29, 2023
Performance times: Wednesdays through Sundays 7.30pm
Saturday matinee performances at 2:00pm
Venue: The Palms at Crown, 8 Whiteman St, Southbank
Tickets: www.ticketmaster.com.au or phone 136100.
Price: Tickets from $69.90 including the booking fee; there will also be a transaction fee
Website: www.legendsinconcert.com