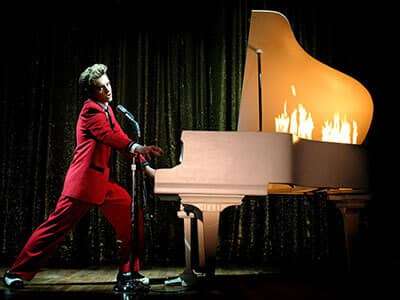 Tribute artists have to accept being able to swallow large doses of their egos. When they take on the persona of a celebrity, they must fade into the background in order to make their character believable on visual and vocal levels.

But every now and then there’s a tribute act that’s so good people can’t help but notice the person behind the persona-lurking somewhere beyond the make-up, costume and over-the-top haircut.

Twenty one year old Lance Lipinsky is one of those lurkers…and for him to come out from behind his target character is really saying something because Lipinsky takes on one of the wilder entertainers out there as the piano Rock pioneer Jerry Lee Lewis.

With many tribute artists, audience members leave either saying things like “he really sounded like so and so” or “he was off on is take of so and so.” With Lipinsky, audiences are wondering and wanting to know “Jerry Lee Lewis or no, who is that guy?”

Lance grew up in the picturesque hills of Wimberley, Texas, a community full of artists, just 1 hour from Austin, the live music capitol of the world. His P.E. coach taught him his first song on guitar at age 11, “Heartbreak Hotel” by Elvis. Influenced by Buddy Holly and the surf group the Ventures, by 15 he was already a gifted guitarist and was inspired to learn piano by being a fan of the classic rock band the Doors. A self taught musician, he discovered Jerry Lee Lewis and piano eventually became his main instrument and a fateful move to Las Vegas at a mere age 17, led Lance to become one of the world’s favorite tributes to the legendary Jerry Lee Lewis and now at age 24 has toured Canada, Europe, Australia, Japan and more.

Lance got to meet “the Killer,” Jerry Lee in 2003 and has been paying tribute to him ever since with high energy piano playing, fantastic showmanship, and clever surprise pyro effects that make the piano really sizzle on “Great Balls of Fire.”

Lance, thin, with unruly hair that flies around like a beacon of another time when he throws his head back, would be Jerry Lee Lewis re-incarnated if Lewis were gone, but he isn’t. Jerry’s still around, at 72, and fans have Lipinsky, who brings all the fire and brimstone to the fore to remind the audience of an era where music changed history.

“I was born way too late,” says Lance, “Although I appreciate the time I’m living in and love all types of music, I am a constant student of the 1950s.”

Lance points out very strongly that although in the past he has portrayed Jerry Lee in several productions, he is not an impersonator. He prefers to do only a tribute to his music, in his own style.

“Although there’s definitely a lot of Jerry Lee influence, it comes naturally, I don’t try to copy him verbatim,” Lance explains, “I’m always myself on stage and the audience can sense sincerity. I don’t believe in rules when it comes to music or performing and we’re here to have a good time.”

“I’m very grateful for the opportunities I’ve had portraying Jerry Lee,” Lance says,” but, for everyone that asks, … no, I’m not going to do it for the rest of my life, and yes, I am recording my own music.”

Keep an eye on this young talent as Lance continues to tour and Rock & Roll in a town near you!